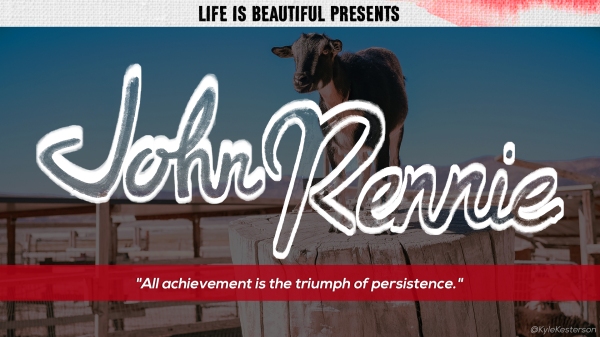 Title card for my Life is Beautiful panel appearance. 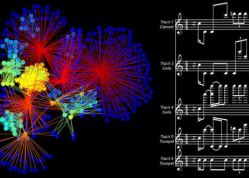 It won’t be Lady GaGa. But maybe a little Lady GAGATCAGCTCATTCGAC…?

On Tuesday at the British Royal Society of Music, the New London Chamber Choir will publicly perform a new choral piece with the lilting but jargony name “Allele.” The genetic allusion isn’t a superficial conceit: it is genuinely genomic music. Each of the 40 members of the chorus will be singing a score based on part of his or her own DNA.

The project began with geneticist Andrew Morley and the Wellcome Trust’s “Music from the Genome” project, which had sequenced the DNA of 40 gifted singers to learn whether they had any distinctive genetic commonalities that might be indicative of musical ability. The findings of that genomic study have not yet been published. In the interim, however, Morley—who had sung with choirs in his youth, according to the BBC—decided to use the genomic sequences as the raw material for an artistic work.

He turned the data over to composer Michael Zev Gordon, who first translated the strings of nucleotides into notes, then rendered them musical through his selection and rhythmic arrangement of them. The poet Ruth Padel provided the lyrics for the singers. As Pallab Ghosh of the BBC writes:

To begin with, there is a single voice singing a simple rhythmic phrase; but as the piece develops, more voices join in – conveying the biological idea of replication and reproduction.
At its climax, each member of the choir is singing their own unique genetic code – resulting in everyone singing a subtly different song.

Morley and Gordon seem not to be the first to think of translating genome sequences into music. Indeed, some artist-scientists have attempted the maybe even more intriguing trick of turning music into DNA and inserting it into living cells.

Research fellow Gil Alterovitz at M.I.T. and Harvard Medical School has developed a computer program that translates information about cells’ gene and protein expression into musical sequences. His purpose is scientific rather than aesthetic, however. Because our brains are particularly adept at picking up patterns in the sounds we hear, Alterovitz hopes that his system could help researchers identify subtle derangements in the synchrony of gene expression that might underlie disease states.

END_OF_DOCUMENT_TOKEN_TO_BE_REPLACED

Who sounds stronger: James Earl Jones or Mike Tyson? Who do you think would win in a fight? Most of us might rather have Darth Vader narrate a documentary, but the smart money says that in an actual knockdown drag-out, bet on the guy who bit off Evander Holyfield’s ear. But apparently not all evolutionary psychologists would agree.

A new paper published in the Proceedings of the Royal Society by Aaron Sell, Leda Cosmides, John Tooby and their colleagues argues that we humans have evolved a faculty for assessing people’s physical strength—and indirectly, their fighting prowess—just from the sounds of their voice. The idea sounds provocative and has a certain prima facie credibility, but unfortunately, my assessment is that this amounts to just one more in the long line of speciously reasoned papers that gives evolutionary psychology a dubious reputation. Here’s why.

END_OF_DOCUMENT_TOKEN_TO_BE_REPLACED

Oh, the allure of a misleading headline. When I saw this story on BBC news, “Mammoths had ‘anti-freeze blood’, gene study finds,” I thought for a moment that scientists had discovered those Ice Age behemoths had secreted some glycerol-like compound into their tissues to prevent freezing. Such a finding would have been genuinely astounding because, as far as I know, that trick is seen only among certain polar fish and overwintering insects; it would have been a first among mammals.

In reality, the surprise is not that the mammoths’ blood resisted freezing but rather that it cleverly continued to do what blood vitally must do: transport oxygen to needy tissues, even at low temperatures. Kevin L. Campbell of the University of Manitoba and his colleagues reached this conclusion through a nifty piece of paleogenomic molecular biology, as they reported in Nature Genetics. Their technique’s fascinating potential to help biologists learn about the physiologies of extinct creatures has already drawn considerable attention, but the mechanism of the hardiness of the mammoths’ blood also helps to highlight a common way in which evolution innovates.

Mammoths display obvious features that must have helped them stay warm in the brutal subzero temperatures of the Pleistocene ice ages, such as long, shaggy coats and small ears. They may well also have had less obvious ones, too, like the arrangement of blood vessels in the legs of caribou that allows countercurrent exchange to minimize the loss of body heat from their legs while they stand in snow. Nevertheless, Campbell had wondered about whether the mammoths’ blood might have been adapted, too, because of hemoglobin releases oxygen into tissues only sluggishly at low temperatures.

By extracting the hemoglobin gene from DNA in well-preserved mammoth remains and inserting it into bacteria, Campbell and Alan Cooper of the University of Adelaide were able to replicate samples of the mammoth’s hemoglobin. And sure enough, in subsequent tests, the resurrected hemoglobin proved to release oxygen much more consistently across a wide range of temperatures—even glacially low ones.

Perhaps it sounds surprising that something so fundamental to mammalian physiology as its hemoglobin chemistry would be subject to evolutionary revision. Surely the mammoths might have survived the cold just as well by evolving more hair or thicker insulation. Yet hemoglobin chemistry is actually a feature particularly well suited to modification—and that has been modified many times throughout evolutionary history. The key is that the genes making the globin proteins have leant themselves to frequent duplication throughout evolutionary history, which opens up the opportunity of variation among the copies and specialization in their activities. END_OF_DOCUMENT_TOKEN_TO_BE_REPLACED

A recent discovery about the evolutionary origins of bats relates, at least indirectly, to a problem causing the extinction of many bat species throughout North America.

As they reported in the Proceedings of the National Academy of Sciences, Ya-Ping Zhang of the Kunming Institute of Zoology and colleagues have found evidence that mitochondrial genes in bats, which are responsible for their metabolic use of energy, have been under heavy selection pressure since early in their evolutionary history. Such a conclusion makes considerable sense on its face because bats’ way of life is highly energy intensive.

Nevertheless, the finding also helps to sketch in some of the mysteries of the evolution of bats. Bats are hard to look at in fossil record because they don’t fossilize well; they suddenly appeared in Eocene strata from about 50 million years ago looking fairly much as they do now, which left cryptic some of the steps up to that point.

Over the past decade, several discoveries have helped to firm up the view that the ancestors of bats spent their lives leaping and hopping through vegetation before they could fly; that the evolution of their wings seemed associated with key changes in certain genes for digits; that their ability to echolocate seems to have emerged after their capacity for flight; that the larger bats called Megachiroptera are indeed descendants of the smaller Microchiroptera and not the convergently evolved cousins of primates. The place of the metabolic changes in that scheme, though, were largely speculative. The demands on bats’ mitochondria could have emerged only once they started flying, but instead it seems that their ancestors made a living as an extra hyperkinetic group of insectivores leaping through the trees and shrubs.

All that energy expenditure comes at some cost to the bats, however. Most obviously, they need to eat colossal numbers of insects to satisfy their energy needs. During the cold winter months when insects become more sparse, bat species that don’t migrate to warmer climes must overwinter in caves, suspended in a state of torpor with their metabolisms at a crawl.

END_OF_DOCUMENT_TOKEN_TO_BE_REPLACED 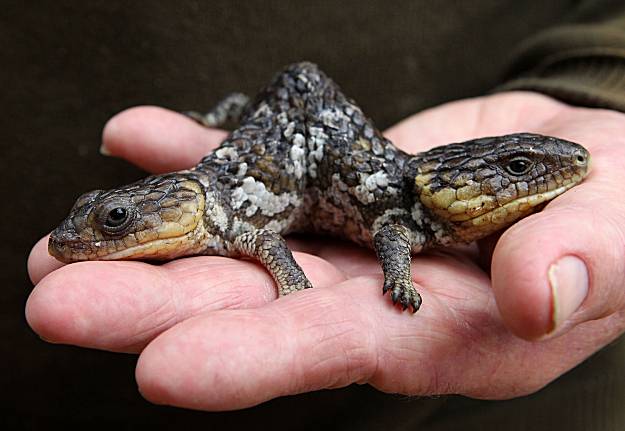 Two heads are not necessarily better than one: A double-headed bobtail lizard born in Perth, Australia, has problems crawling because its hindlegs get conflicting signals from each brain. Also the bigger head keeps trying to eat the smaller one.

Update: By the way… “Bicephalous”? “Dicephalous?” Sources I’ve consulted seem to accept both, and if anything accept the former as more common, but the latter seems more consistent in its use of a Greek prefix. Thoughts, my little wordbugs?

I was honored that one of my Gleaming Retort essays was collected in this anthology.